Master of Magic and Comedy

From Hollywood to Australia and from Las Vegas to Japan – Murray Hatfield has thrilled audiences around the world with his signature style of magic and illusion with a serious comedy flair – On television, stage, in theatres, performing arts centres, nightclubs, fairs, exhibitions, casinos, corporate functions and on luxury cruise ships on the high seas. 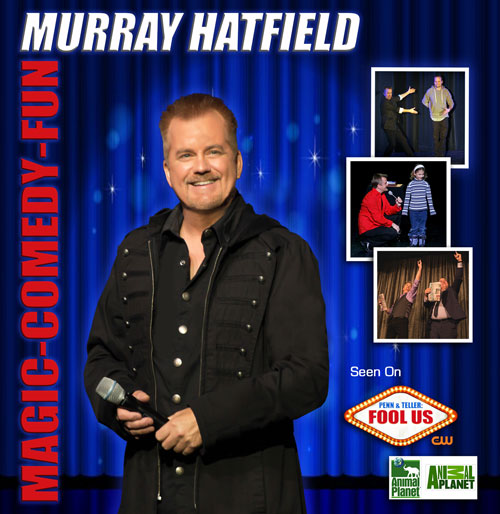 Murray Hatfield has spent the last 2 decades taking some of his favorite magic illusions and combining it with his incisive wit for a fast, fun, funny and absolutely amazing experience for audiences of all ages.  In addition to performing he also also writes, produces and directs stage shows for audiences from the PNE in Vancouver, BC to the “Magic Space” in Tianjin, China.

From the age of 10 when he saw his very first magician, Murray has been obsessed with magic.  By 15 he knew that he wanted to turn his passion into his career and by 25 he was headlining one of the largest magic shows in the country.  Now he travels the world creating, teaching, lecturing, producing and most importantly – performing his own special brand of magic.

Murray has won numerous international awards and accolades including being named “Magician of the Year” by the Canadian Association of Magicians. He is a regular guest star at the famed Magic Castle in Hollywood, CA and has appeared on television shows including Penn and Teller’s: FOOL US!